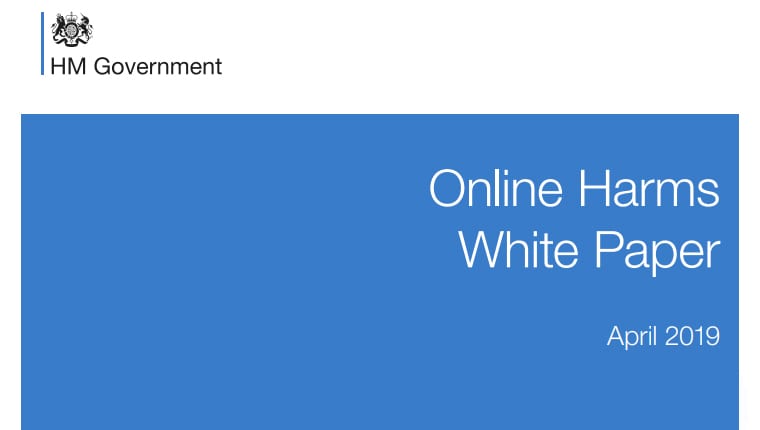 The Government on 12th February 2020 published an updated White Paper on Online Harms. What does this mean for marketers, particularly social media marketers and social media agencies? There is still a lot that is unclear, but here’s our summary of some key points of view currently.

The internet is an integral part of everyday life for so many people. Nearly nine in ten UK adults and 99% of 12 to 15 year olds are online. As the internet continues to grow and transform our lives, often for the better, we should not ignore the very real harms which people face online every day. In the wrong hands the internet can be used to spread terrorist and other illegal or harmful content, undermine civil discourse, and abuse or bully other people. Online harms are widespread and can have serious consequences. Two thirds of adults in the UK are concerned about content online, and close to half say they have seen hateful content in the past year. The tragic recent events in New Zealand show just how quickly horrific terrorist and extremist content can spread online.

We cannot allow these harmful behaviours and content to undermine the significant benefits that the digital revolution can offer. While some companies have taken steps to improve safety on their platforms, progress has been too slow and inconsistent overall. If we surrender our online spaces to those who spread hate, abuse, fear and vitriolic content, then we will all lose. So our challenge as a society is to help shape an internet that is open and vibrant but also protects its users from harm. The UK is committed to a free, open and secure internet, and will continue to protect freedom of expression online. We must also take decisive action to make people safer online.

This White Paper therefore puts forward ambitious plans for a new system of accountability and oversight for tech companies, moving far beyond self-regulation. A new regulatory framework for online safety will make clear companies’ responsibilities to keep UK users, particularly children, safer online with the most robust action to counter illegal content and activity. This will be overseen by an independent regulator which will set clear safety standards, backed up by reporting requirements and effective enforcement powers.

This initial government response to the Online Harms White Paper provides an overview of the consultation responses and wider engagement on the proposals. It includes an in-depth breakdown of the responses to each of the 18 consultation questions asked in relation to the White Paper proposals, and an overview of the feedback in response to engagement with stakeholders.

“The Online Harms White Paper sets out the government’s plans for a world-leading package of online safety measures that also supports innovation and a thriving digital economy. This package comprises legislative and non-legislative measures and will make companies more responsible for their users’ safety online, especially children and other vulnerable groups.The White Paper proposes establishing in law a new duty of care towards users, which will be overseen by an independent regulator. Companies will be held to account for tackling a comprehensive set of online harms, ranging from illegal activity and content to behaviours which are harmful but not necessarily illegal.”

“The White Paper proposes establishing in law a new duty of care towards users, which will be overseen by an independent regulator. Companies will be held to account for tackling a comprehensive set of online harms, ranging from illegal activity and content to behaviours which are harmful but not necessarily illegal.”

The UK’s war on online harms seems destined to fudge and fail. Despite the bluster, the draconian regulation might end up being little more than grandstanding.

If all goes to plan, the Online Harms White Paper will turn out to have been an elaborate fudge. That’s the only reasonable reaction to the UK government’s ostensibly landmark plan for crushing down on the spread of illegal content on the internet. Launched with a lot of fanfare in April 2019. At the time, it was largely perceived to be a leadership vehicle for one of the cabinet ministers sponsoring it – former Chancellor and then-Home Secretary Sajid Javid. The 98-page paper sketched out a doctrine so over-the-top it was almost comical. Its promise was ridding the internet of a series of “harms” – the list, as per a handy table, included: child exploitation; terrorist content; organised immigration crime; modern slavery; extreme pornography; revenge pornography; harassment and cyberstalking; hate crime; encouragement to suicide; violence incitement; sales of weapons or drugs; prisoners’ use of the internet; and sexting between minors. Overseeing all of this, we have now learned, will be poor old Ofcom.

It’s an unenviable task. Online platforms hosting user-generated content – essentially every website allowing users to interact and share material – would be burdened with a new “duty of care”. That would require that they protect their users, especially children, from viewing posts featuring those kinds of illegal content. Failing to do so would result in fines – which is pretty par for the course – but the paper also suggested that the executives of offending companies might face civil and criminal prosecution, and that in extreme cases the government might resort to ISP blocking, i.e. taking the website offline in the UK.

“All that’s wrong with the UK’s crusade against online harms – from private messaging to implementation, problems abound in the government’s white paper.”

New powers will be given to the watchdog Ofcom to force social media firms to act over harmful content. Until now, firms like Facebook, Tiktok, YouTube, Snapchat and Twitter have largely been self-regulating. The companies have defended their own rules about taking down unacceptable content, but critics say independent rules are needed to keep people safe. It is unclear what penalties Ofcom will be able to enforce to target violence, cyber-bullying and child abuse. There have been widespread calls for social media firms to take more responsibility for their content, especially after the death of Molly Russell who took her own life after viewing graphic content on Instagram. The government has now announced it is “minded” to grant new powers to Ofcom – which currently only regulates the media and the telecoms industry, not internet safety.

IMPRESS welcomes the Government’s first response to the Online Harms consultation that suggests it is minded to give Ofcom new powers to regulate user generated content on the internet. This is a unique opportunity to comprehensively update media regulation in the UK and to ensure the public is protected from online harms. IMPRESS looks forward to hearing more detailed announcements in due course.

Regarding today’s response, IMPRESS urged the government to take the necessary steps to avoid creating an uneven regulatory framework where some operators get to shirk their responsibilities in a way that makes it more difficult for members of the public to get harmful content removed and put a stop to online abuse.

IMPRESS welcomes further constructive engagement with Ofcom, to ensure that statutory online harms regulation provides a coherent and easy to navigate system for the public that works alongside IMPRESS’s approved scheme of regulation for news websites.

Ed Procter, Chief Operating Officer of IMPRESS, said: ‘We believe it is crucial that the government and Ofcom continue to work closely with regulators like IMPRESS to avoid duplication and gaps in the regulation of an increasingly converged media. We support the proposal for editorial content to fall outside the scope of the new regulations but believe further clarity is required when it comes to user-generated content on news websites such as comment sections.’

(For disclosure, Pam Vick of Caspia is a non-executive board member of IMPRESS)