Today, as more and more businesses get to open their doors here in the UK after a long 3 months, we’re looking at the customer service areas companies need to watch to avoid losing business, based on research by Brandwatch who surveyed 4,092 adults from Australia, China, France, Germany, Italy, Spain, the UK, and the United States through their smartphones and tablets.

People were asked to rank the impact three customer service issues would have on them using a company again, with one being no impact at all’ and five being ‘big impact’. Here’s what they said.

For long hold times many people put themselves in the middle ground, with 60% choosing options two to four. Having said that, 24% said being kept waiting on hold would have a big impact – that’s a significant chunk of a customer base. 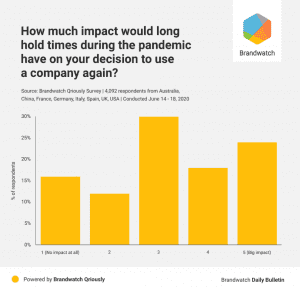 While it’s clearly an important issue, plenty of people seem willing to give some leeway to businesses. With lots of offices and call centres either closed or open but with lower staff numbers, maybe some consumers are trying to be understanding. How far they’re willing to take this understanding is a different matter.

A flexible return or refund policy is a much bigger deal to people. Half of respondents picked options four or five, with 29% specifically saying it would have a ‘big impact’. That’s a substantial amount of custom at risk due to this issue.

A lot more people are shopping online while stores are closed, which is likely boosting the number of returns people are making. This will be particularly acute for companies selling clothes. Clearly consumers are expecting businesses to adapt to this and make returning items as easy as possible.

We now reach the biggest issue of the lot. When it comes to how responsive or easy to contact a company is, 58% of people picked options four of five, with 37% specifically picking the latter. 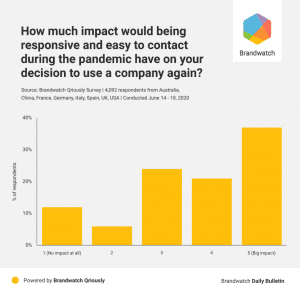 This tells us that any company that goes dark during this time, either by ignoring emails or not answering the phone, are taking a big risk. Just 12% of people said this would have no impact on them using the company again.

It’s a simple lesson to take away. Make sure people have ways to contact you, and make sure you respond when they do. It’ll be key for retaining brand loyalty. Be sure to read the full report on the topic to see what else needs to be done.