Although 2020 was ad spending’s most disappointing year on record worldwide, it could have been worse. In fact, the final figures outperformed dire mid-pandemic projections: 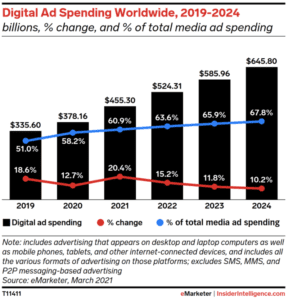 Not surprisingly, traditional ad spending bore the brunt of the pandemic last year. Advertising dollars flowing to TV, radio, out-of-home (OOH), newspapers, and other print publishers contracted by 15.7% worldwide in 2020. Pre-pandemic, a forecast of a far more moderate 0.2% decline for traditional ad spending was proposed, which tracked with the medium’s persistent, slow decline.

For digital, the story was the opposite. Worldwide digital ad spending nearly matched the pre-pandemic forecast for 2020, despite historic economic disruptions. In February 2020, a forecast of 13.6% growth for digital ad spending worldwide was made. The final figure was a very close 12.7%.

The surprising resilience of digital advertising in 2020 does not mean that the industry was unaffected by the pandemic. In fact, the contours of the digital ad space shifted dramatically throughout the year. But the push and pull of various spending reductions, surges, and redirections netted out to a total very close to what it would have been with no virus.

Due to pent-up demand for traditional advertising, as well as exploding growth in ecommerce-related ad spending and social media advertising, it’s expected that a record-setting pace will be set for ad spending growth worldwide this year. Moreover, the trend line for future spending has also shifted up, thanks to the unexpected resilience of digital ad spending in 2020.

Total media ad spending worldwide will reach $747.67 billion, at a growth rate of 15.0%—the fastest since eMarketer began tracking the metric 10 years ago. By the end of 2024, spending will nearly reach $1 trillion. For context, it just crossed the $500 billion mark in 2016. 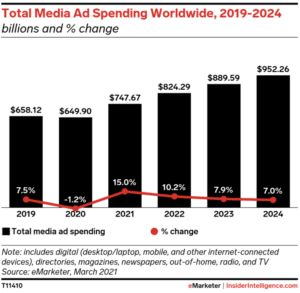