What Do We Want?

This week, we’re looking at what millions of people have said they wanted over the last year.

We want this and we want that

There’s always something we want, from an extra slice of cake to a dream job. On the internet, we’re not afraid of expressing those wants.

Using Brandwatch Consumer Research, we found 81.3m mentions of people wanting something posted on Twitter and forums this year. That’s an increase of 52% compared to the same time period in 2019.

The level of “I want” mentions jumped in March 2020 as the Covid-19 pandemic was declared and lockdowns were brought in around the world. It’s no surprise that our wants increased as we were restricted in what we could do. While these types of mentions have come down from their November 2020 peak, they’re still way above pre-pandemic levels. The question is, what do people want? 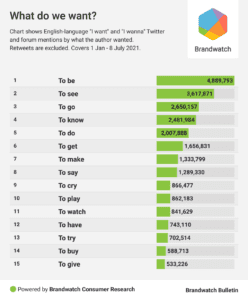 To answer this we went back into the Consumer Research platform and started to break down the data. We kept things broad to start, looking at the most common phrases that come after “I want” or “I wanna”. This produced a list of verbs, with people wanting to “BE” something coming way out in front.

“To be” is the most common verb in English, which may explain it taking the top spot in our data. Clearly general usage is having an effect here, so let’s dig a little deeper.

We found it difficult to pull any big topics out of the “to see” and “to do” datasets. Both had a lot of mentions, but they covered such disparate topics or were so vague that not much stood out (a lot of people referred to things they wanted to do without naming said things). 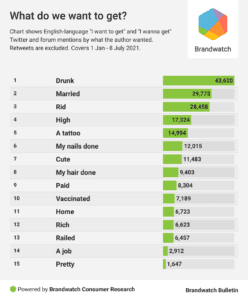 Instead let’s jump to sixth place to see what people want to “GET”. No one’s going to argue the world hasn’t had a tough time of it since 2020, so seeing ‘get drunk’ and ‘get high’ in the top five is not a shock. Vaccinations rank highly too, which may explain the nails and hair mentions as people get ready to get back out on the town. It looks like many will be looking for their future life partner too.