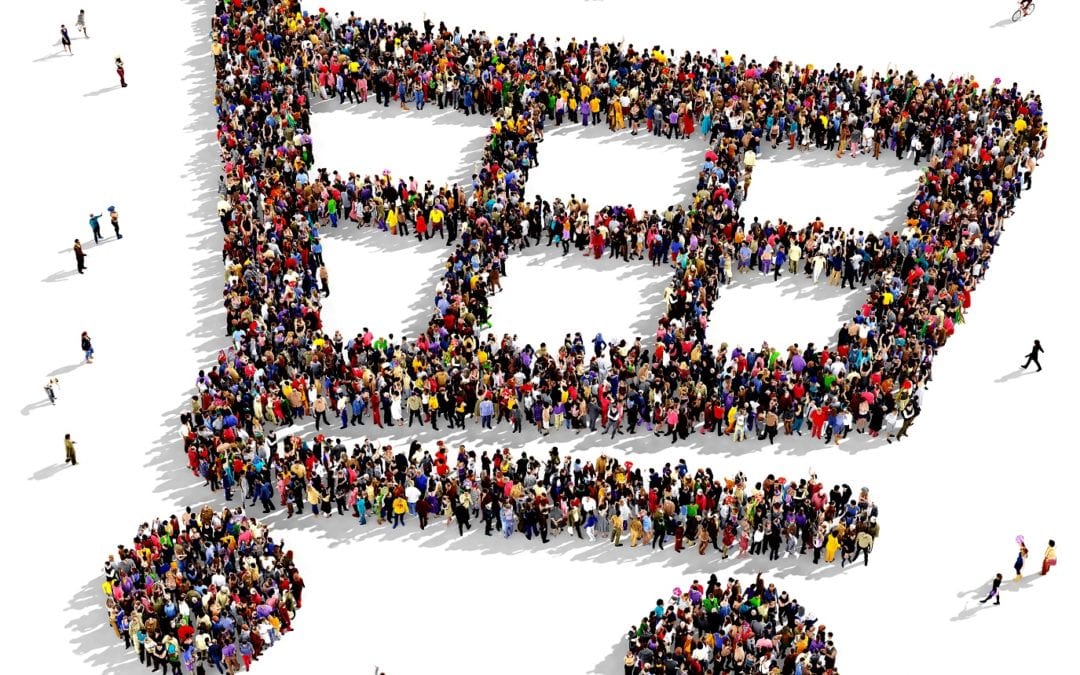 There’s still a way to go, it seems.

Back in April Brandwatch looked at how consumer spending in the UK had begun to recover as restrictions were eased and vaccination levels rose. While things were certainly looking better, there was still a long way to go to catch up on lost spending

Two months later, and with further lockdown easing in the country and warmer weather, we wondered how things are looking now.

Today we’re taking a look at how much people are spending on their credit and debit cards in the UK at around 100 major retailers.Indexed to February 2020, the data allows us to track UK consumer spending on a week-to-week basis compared to pre-pandemic levels.

For more details on the methodology behind CHAPS data and how it’s collected, here’s an explainer.

First, we looked at how aggregate spending levels are looking now that millions are vaccinated, and pubs, bars, and restaurants can let customers indoors. 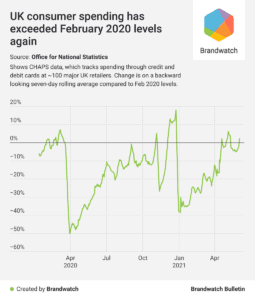 Importantly, we can see in May 2021 on the right hand side of the chart that spending hit its highest levels of 2021. This was driven by a number of factors, including the first pay day after some restrictions were lifted in April, and a bank holiday weekend. Clearly this got people out and spending in their droves, peaking at 6% above February 2020 levels.

Some may look at the following drop and get concerned, but this follows a pattern we’ve often seen. Spending spikes at the beginning of the month as people are paid, and then drops as the weeks wear on. The drop in May looks more severe than previous ones due to the higher than normal spike that preceded it.

We can also see the spike following the pay day at the end of May, which, while not as big a jump as the one before, sits way ahead of the levels seen in March. There has been undeniable progress, and while the country’s economy has to play the long game, it looks like things are going in the right direction. If things hold, we could see levels remain consistently above February 2020 ones.

Breaking things down by sector

That’s the big picture, but what happens when we look a little closer? Usefully, the data can also be split out into the following categories: 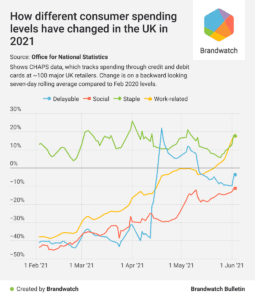 To get it out of the way, let’s start with the staples category. There’s little change here, with it following the same pattern of a boost after pay days, and then a decline over the rest of the month. There seemed to be a bigger than usual decline in May, which may be due to the extra spending in the social category over the bank holiday weekend.

The delayable category has been declining since its huge spike in April when non-essential shops open. This slow decrease is to be expected as things like clothing and cars don’t need replacing quickly, but nevertheless, levels are still below what they were pre-pandemic.

Let’s turn to social spending. With hospitality venues allowing people indoors, we may have expected a bigger jump after the last pay day, but instead it’s fairly modest. But we should remember how large a recovery it’s made so far, and that levels exceeded the bank holiday weekend ones. Bar and pub owners aren’t where they want to be just yet, but the picture is looking brighter each day.

Finally we have work-related spending, which skyrocketed towards the end of May. Coinciding with further lockdown easing, this suggests many more people are getting back to work. With some companies reopening offices, this could be a good sign for the social category as more people are now about to grab takeaway coffees and pop out for food on their lunch breaks.

All in all, we have a picture of ongoing recovery, but one that shows consumer spending is not going to snap back in an instant. People and businesses are still cautious, cases are rising again in the UK, and many consumers may be hesitant about spending when the future is uncertain.

While the data is looking positive now, it’s important to not get overconfident.