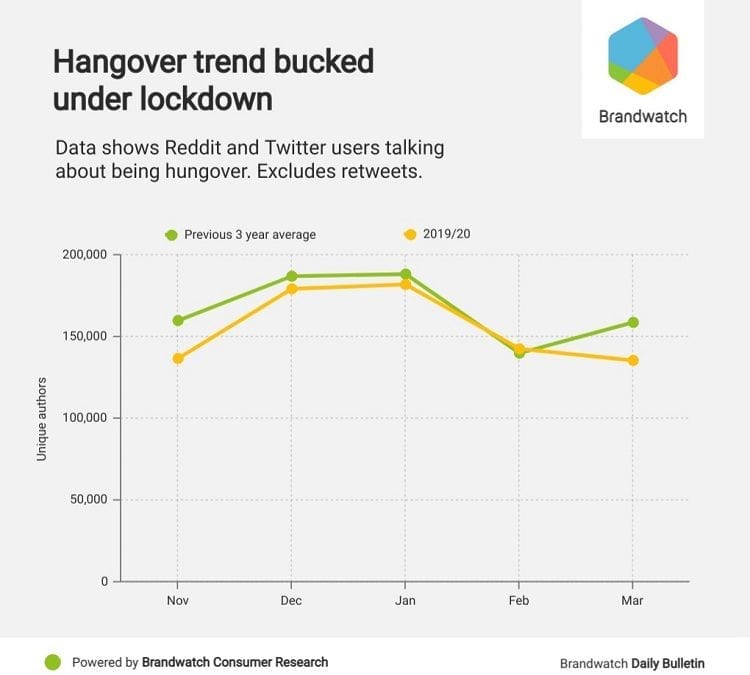 In the midst of all the doom and gloom, some fab trends data from Brandwatch this week.

In the last 31 days, there were 1.4m English-language mentions of weird dreams and nightmares, up 27% compared to the 31 days before that.

“According to 28.8k people, they’ve had the worst nightmares of their lives during the outbreak. Perhaps influenced by the news, there were 1.4k mentions of nightmares about cruise ships on social media, making it the most common ‘shared’ nightmare in the last 14 days. Online reports of sleep paralysis, when a person wakes up but is unable to move, also increased. In the last 14 days there were 1.9k mentions of the condition, up 42% from the two weeks prior.” 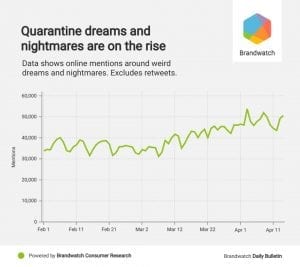 And apparently, rather contrary to what might be expected, hangovers are on a comedown. it seems like we’re better at pacing ourselves at home compared to when we’re out and about.

“Every year sees a similar trend for hangover reports online. Peak posting time is December and January, as people get festive and ring in the New Year. Then it drops in February, only to pick back up in March. This year, things look different. In 2020, hangover discussions dropped from February to March by 5%, rather than rising by the average 13% which we’ve seen in previous years. It’s hard to pinpoint a specific reason, but we can look to our altered drinking ‘culture’. We’re at home with our chosen drink, and that’s it. There’s no happy hour, less peer pressure to keep going, and, when the booze runs out, many people can’t even leave the house to stock up.”

However maybe we’re getting back into our stride. Brandwatch reports that “Looking at the data in April so far, people are getting back to their headache-inducing ways. Perhaps we’ve just got better at stocking up.”